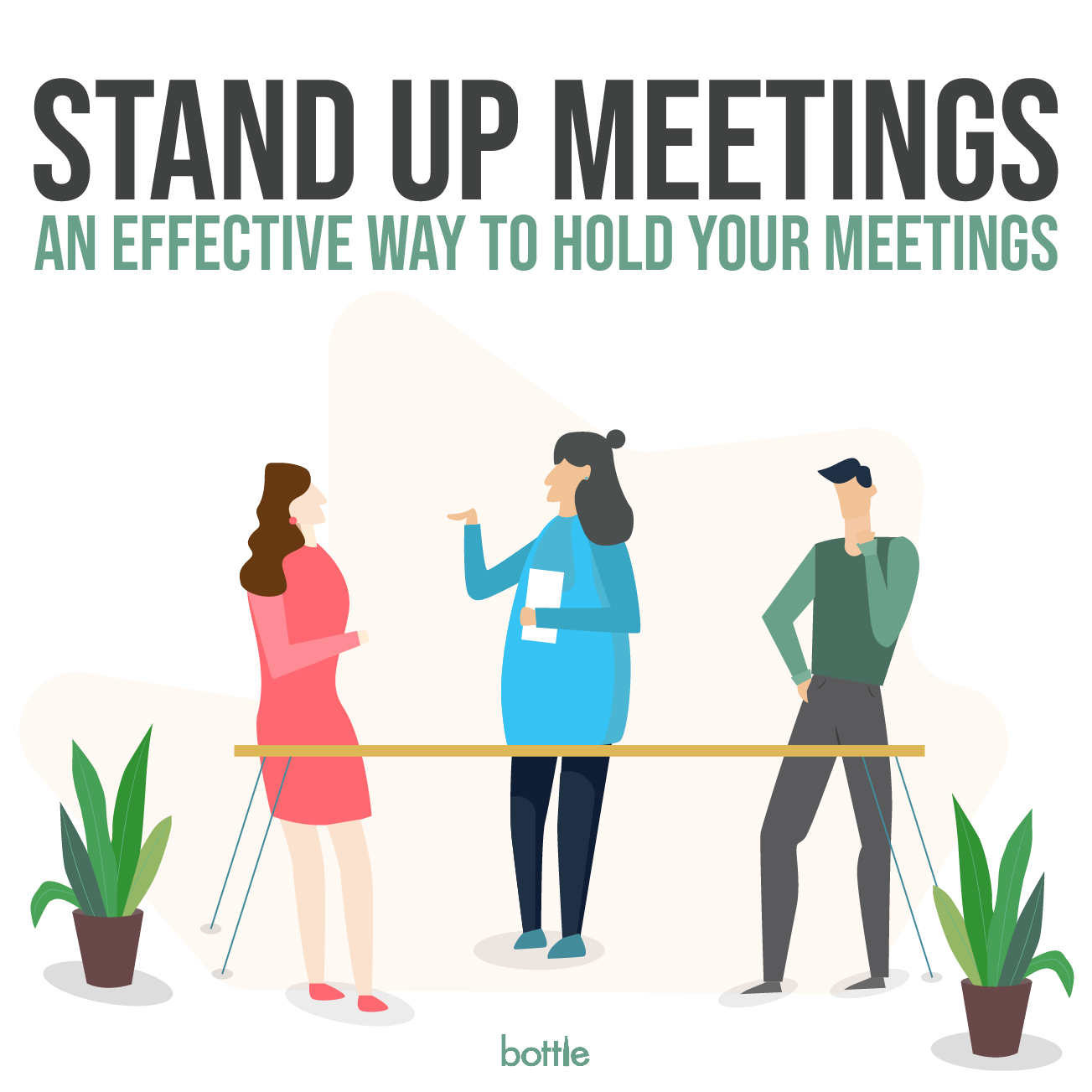 Stand up meetings: An effective way for holding meetings

A few weeks ago, I saw my sister standing in front of her laptop with the camera switched on, fidgeting & talking to her group (who were also standing) for quite a few minutes.

After staring at her for some time in a perplexed manner, she looked at me and responded saying she was in a meeting.

A team of 13 all standing in front of their devices for a meet. Doesn't sound like your regular meetings, eh?

Well, once you know the reason, it all makes perfect sense.

Their team leader wanted to implement the concept of Stand Up meetings. He wanted to make their team meetings shorter, unlike the previous ones. On a side note, the minute the group sat, the 20 minutes meeting turned into an hour-long one, to say the least. This is precisely why stand-up meetings are necessary.

No one likes having meetings that go on & on for hours, where everyone keeps reiterating their respective points, speaks in loops, producing no proper outcome. Many entrepreneurs, leaders, business tycoons, now prefer communicating over emails, rather than going through excruciating meetings.

Stand-up meetings are where each attendee, stands throughout the meeting, meant to last for a maximum of 15 minutes. These meetings are also known as Daily Scrum meetings / Daily Kanban meetings and have long been popular in the agile software development frameworks of Scrum and Kanban.

This process works best for smaller teams of 3-8. If a group has more than 8 members, it's best to divide them into smaller groups.

These meetings are more like daily / weekly check-ins for the teams.

Why should you switch to stand-up meetings?

If conducted properly these meetings can lead to team alignments, productivity with minimum time wastage & high accountability. According to New York Magazine's Melissa Dahl, stand-up meetings can reduce up to 34 percent of meeting time. When the participants are all standing, many can concentrate better and stay alert. They can focus on the situation at hand without steering away from it, get done with the meeting faster, before the exhaustion sets in due to standing.

It is also argued that while standing one automatically has a stronger presence being able to express better, thus demanding everyone's attention.

Business and Strategic coach Chuck Gulledge from his experience stated stand-up meetings have also resulted in increased morale, better teamwork, and reduced silos (when one refuses to share information with others) amongst the group.

That's not all, an aspect of health is also associated with stand-up meetings. " Sitting is the new smoking," says doctors, as hours of sitting can make one susceptible to Type 2 Diabetes, cardiovascular diseases, severe back problems, and various other health issues. Hence, it is highly advised to prevent staying in a sedentary form while working by standing & taking walking breaks.

How to conduct stand-up meetings?

Here are a few important facts to keep in mind:

There needs to be a structured way to go about the meet. The focus should either be on the process or the people, and the 3 main questions to answer are:

● What have they achieved since the previous meet?

● What will they be prioritizing today, to get it done before the next meet?

● What are the various obstacles being faced by them, slowing their progress?

If the plan is to focus on the process, then the last question is to be discussed in detail, to figure out the obstacles and possible solutions to overcome them.

ALLOWING EVERY MEMBER TO PARTICIPATE

Each attendee should be given a fixed amount of time to speak and not stray off-topic, holding themselves & others accountable. At the same time, someone from the group is always required to note down the important points from the discussion, which would be beneficial later. In cases when physical meetings aren't possible, it's best to make use of video conferencing platforms, where members can join in from anywhere.

An individual from the group needs to be in charge to conduct & facilitate the meeting. This person must make sure that every attendee is sticking to their allotted time for speaking and not deviating. Whenever someone veers off the subject, the mediator should politely stop them. This role can be assigned to anyone in the team from the leader to any of the members.

According to the convenience of each attendee, a specific day & time should be agreed upon. A team can have this meeting once a week, on the same day at the same time, or more than once depending on their dynamics. The meeting must always start on time and end within 15 minutes; otherwise, the purpose of it will be defeated.

There are different approaches to determine the speaking order. Teams can follow the Round Robin method, where the adjacent person to the left or right continues; Pass the Baton in which the speaker passes the baton to a member of their choice who needs to continue or no fixed method where whoever wishes to start & continue does so.

A space, in the end, to question and discuss the matters raised earlier by the team in the meeting, is quite vital to the process. If someone is skeptical about some decision or has a point to make, this is the space for it. The other essential factor to make sure that the tasks are being executed as per the discussion is the follow up which can happen via email.

Though standing throughout the meeting is an absolute necessity for the process, not everyone would be comfortable standing or be physically fit enough to continue standing, even if it's just for 15 minutes. In such cases, they should be allowed to sit & exempted.

It's recommended to send out calendar reminders in case of a virtual meet or a physical alarm at the workplace, minutes before the meet, to start on time.

Short, crisp & precise- the way it should be!

That's it for this one!

Looking to increase your team's productivity while making sure they have great experience?