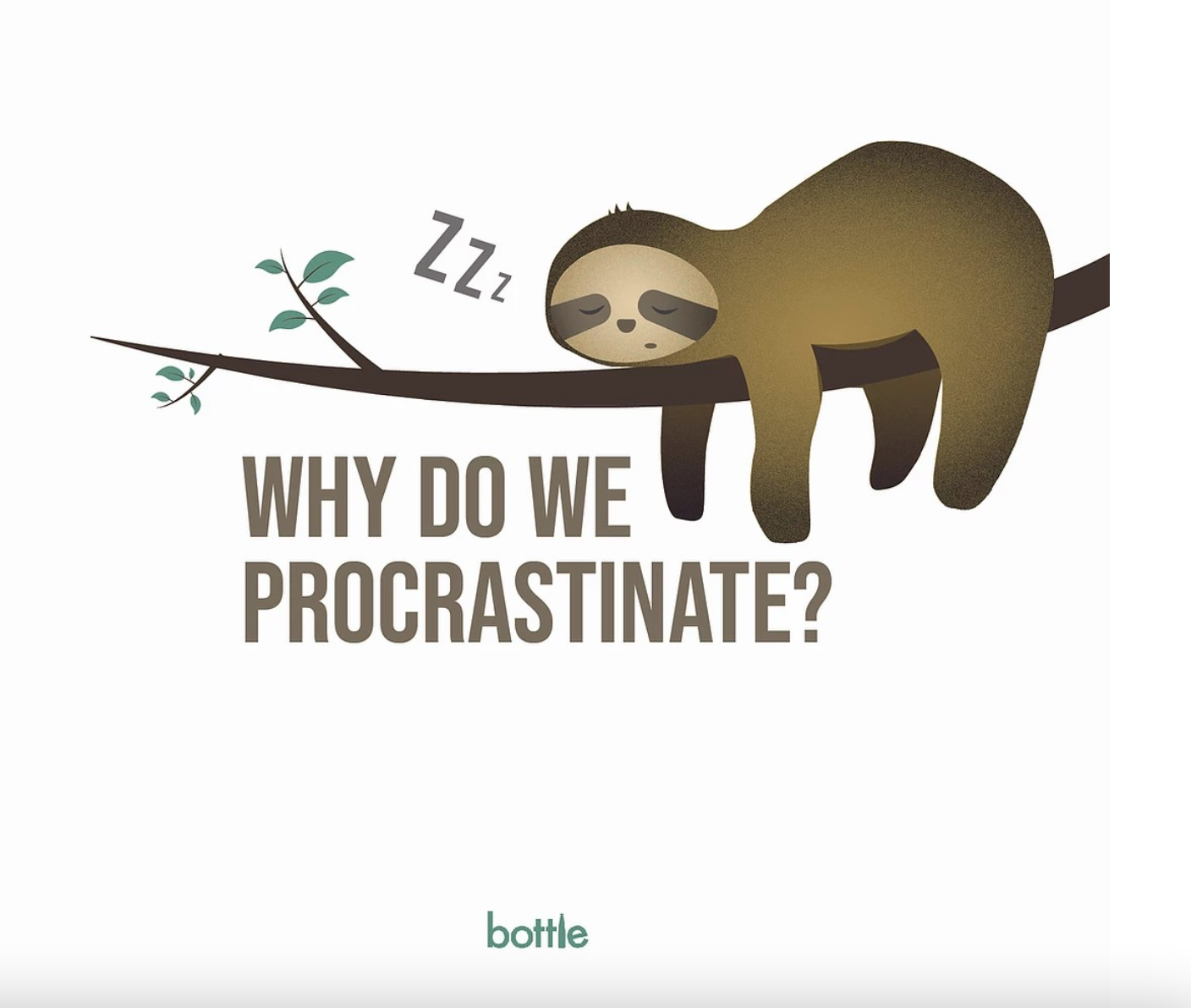 Reasons for procrastination & 4 ways to overcome it

Think of the last time you had to submit that super important project or when you had to study for a critical but boring exam. You must have spent time arranging your table, ensuring it is aesthetically appealing to boost your’ mood’ to study or finishing one more episode of that season.

This is procrastination, and everyone, including you, has had an encounter with it. In fact, according to researcher and speaker Piers Steel, 95 percent of us procrastinate to some degree.

Procrastination is when you do trivial tasks before/instead of an important job just because the task is unpleasant or not exciting enough.

Don’t confuse procrastination with laziness. Laziness is an inherent feeling of not wanting to do anything and being content with that decision. A lazy person won’t do anything, and they are okay with it. But someone who procrastinates has the inherent desire to do the task but cannot make themselves do it. Procrastination can make us feel incredibly guilty for the lack of productivity and results.

When you don’t submit that vital task and don’t care about it, even if your boss shouts at you, you are lazy. You don’t mind the decision you made, and you don’t care about the result. But procrastination is when you delay that work even though you wanted to do it. You knew you would get an earful from your boss, but you still lingered on it anyway. But with procrastination, there is emotional reasoning as to why that happened even though you wanted to do the right thing.

Why Do You Procrastinate?

According to research conducted by Dr. Tim Pychyl, there are seven different ‘triggers’ that make a task disliked:

Think of a task that you’ve wanted to do for a while. Could you connect the root cause of procrastination to any of the above triggers? The more you hate a task because of its nature, the more you will procrastinate. It’s simply an emotional reaction. You will avoid the job you dislike, just like how you avoid the person or food you dislike.

There is another reason why you may be procrastinating.

According to a study, procrastination is a way to suppress the negative emotion/mood you tend to feel because of a task’s unpleasant traits. Your brain stops you from doing a job you dislike because of a feeling that puts your brain in a negative mood. For example, if you have ‘self-doubt’ in doing a difficult task because you have low ‘self-esteem, that’s a negative mood for your brain, and you would rather not do it. It’s like, staring at a book and thinking, ‘Am I brilliant enough to study this?”

Your brain thinks of this negative feeling like a threat and would rather avoid it than go through it. This is why you don’t ‘feel’ like doing that daunting, dull, or humungous task in volume, even though you know it’s essential.

According to another study, your brain considers your’ future self’ as a stranger when compared to you right now on a neural level. This means that your brain isn’t bothered by the problems of a stranger (your future self) when your own body is under threat of negative moods (self-doubt, stress, frustration, etc.) from doing a task. This is the science behind procrastination that is absent in laziness.

How To Reduce Procrastination?

Realize that you are Procrastinating.

Procrastination can be controlled and reduced significantly by anyone. One must first realize that procrastination is an emotional problem as well, not just a productivity problem. Even if you have the best time management software, you need to learn the emotions and tame them to use these tools to your advantage. You need to tell yourself that you are actually procrastinating at the moment rather than just feeling low about it. Recognize it and ask yourself to instill it thoroughly.

Most of the time, You procrastinate, thinking you have time, and when you start the work, you realize that the task is never-ending. Then you go on an endless loop of a guilt trip and self cursing and thoughts of “Ugh, why couldn’t I just start earlier! I am so stupid and dumb!”.

Avoid thinking this way entirely and forgive yourself. It’s essential to believe that you are going to start and do well. You just removed the negative mood that pulled you from doing this task. Please don’t add more negativity to it, but add positivity to help yourself do better. A study in 2010 showed that students who forgave themselves for procrastinate for the first exam ended up procrastinating way lesser in the subsequent exams. Self-forgiveness directly supported productivity because they let go of their past behavior and focused on what’s more important.

Think of the things you do when you procrastinate. Netflix? Social Media? Playing games? These are the environmental factors that incite procrastination in you. As soon as you feel any of the seven triggers mentioned above, you will find solace in these activities to eliminate the negative mood. A recent study found that having your phone out and insight, even if you are not using it, can make you perform 20% worse than if you had put your phone away.

A simple and old trick is to keep everything that distracts you away and out of sight for a specific period. You don’t need to go on a spree of avoiding it the entire day. If you feel you can work for 30 minutes, which you feel comfortable with within the beginning, keep that as a timer and avoid the distractions for that amount of time. You can do this!!

There is something called The Zierganik effect, which describes how once you start something, your brain remains alert until you finish it because your brain remembers uncomplete tasks much better than the completed ones. It’s like how you know that fantastic song’s starting bit only but can’t recall the main chorus, and you get annoyed. Keeping the same logic in mind, do anything to get started with the task.

Once you start your task by sitting on your chair and laptop open, you will work on it. This is mainly because once you start doing the job, you realize that the task wasn’t as bad as you thought.

Once you break through the initial amount of friction, the path to finishing any task becomes very smooth. Remember, procrastination is an emotional problem too. You can control your emotions better than anyone, but with practice. It’s okay if you have procrastinated so far; we all have. So let’s forgive ourselves and get ready to be productive!

Now, quit procrastinating by reading this and get to work!